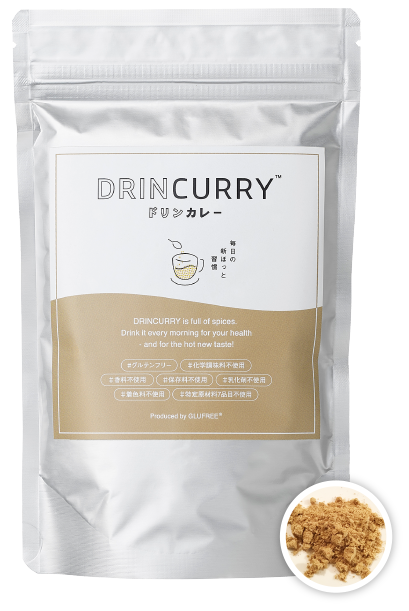 DRINCURRY is full of spices. Drink it every morning for your health – and for the hot new taste!
Drincurry is a new type of hot drink. Just like instant coffee, you simply add water.
Drincurry is a way to drink spices, bringing warmth into your everyday life.

#Does not contain any of the seven major allergens –
eggs, gluten, milk, prawns, crab, nuts and buckwheat. 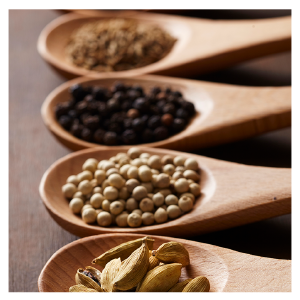 The idea to create a curry drink came from drinking hot water every morning from a traditional iron teapot.

Spices have numerous health benefits. So we wondered what it would be like to add spices to hot water. Perhaps adding a curry taste would make hot water tastier and more nutritious? We thought it should be a taste that everybody would like: men and women, the young and the old. 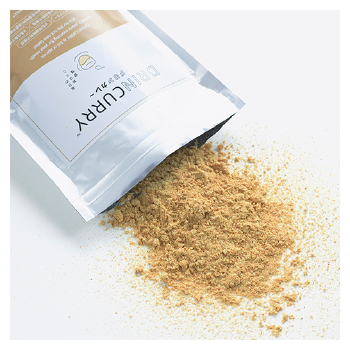 So we drank various samples every day in a search for the kind of drink we had imagined. The final result, Drincurry, combines more than 15 spices.

Drincurry is made without additives such as chemical flavour enhancers, preservatives and artificial colouring. It contains none of the seven major allergens. In particular, it is made without wheat flour, so it is gluten-free.

Try making a cup of Drincurry part of your everyday life ! 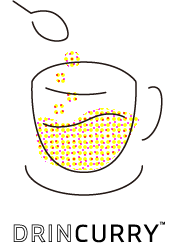 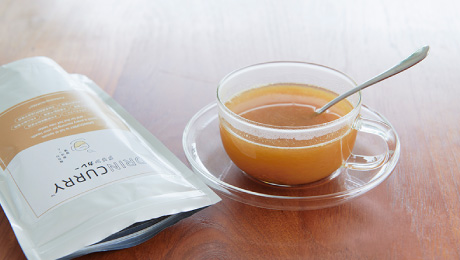 Put 5 g (about 1 heaped teaspoonful) of Drincurry in a cup. Add 150 ml of hot water. Mix thoroughly. Your Drincurry is ready to drink!

Drincurry has been made with natural ingredients. That means it contains some spices that do not dissolve quickly. Make sure you stir thoroughly

Contains none of the 7 major allergens:
No egg, No wheat, No prawn, No crab, No buckwheat, No nuts, No dairy

For children, Drincurry can be mixed with milk or soya milk to make a mild curry drink.
Drincurry can also be used for cooking and to liven up all kinds of dishes. For example:
· To make curry sauce or to add extra spice
· In pilaf and fried rice
· Sauces and toppings
· Soups and stews
· Pasta and pizza
· Soba (buckwheat) and udon (wheat-flour) noodles

Spices have been used since antiquity in traditional Chinese medicine. They come in a vast number of varieties and have a range of effects.
Drincurry combines more than 15 spice varieties in a precise balance. We recommend drinking a cup a day to get the most out of its benefits for health and beauty.

Long familiar for its use as a medicine. Its yellow colour comes from its constituent curcumin, which is also known for its antioxidant effects and said to strengthen the liver's detoxifying function

Recognizable for its unique scent, it has drawn attention for its detoxifying properties. Rich in vitamin C, calcium and iron.

Has a mysterious, bittersweet fragrance. One of its constituents, cuminaldehyde, boosts the metabolism and has a calming effect. It also contains limonene and vitamin E, which are known as antioxidants.

A sweet fragrance redolent of maple syrup, called “methi” in India. It is essential in Ayurveda, the system of traditional Indian medicine

One of the worldʼ s big four spices, along with cinnamon, cloves and nutmeg. It is said to boost the appetite and facilitate digestion.

Rich in vitamins A and C, it facilitates digestion. Its hot component, capsaicin, is thought to boost the metabolism. But it is advisable not to eat too much because of its strong stimulant effect.

Dried tangerine peel known for its fragrance. It is said to have carminative and antitussive properties and to promote the wellbeing of the stomach.

Said to be one of the world's oldest spices, it is known for its unique sweetness and fragrance. Contains large quantities of calcium, iron and manganese.

Called the king of fragrances because of its strong scent. Used as a spice and herbal remedy since several thousand years BC. In particular, it is used to treat oedema and other forms of swelling.

Contains allicin, which stimulates the breakdown of sugar, so boosting recovery and physical strength. It is known to have various effects, so has been used since antiquity as a folk medicine.

A hot seasoning based on chili peppers and with the addition of spices including cumin, oregano, garlic and paprika.

Has a sweet, strong fragrance like vanilla and produces a numbing sensation on the tongue. It is also said to have antibacterial effects, to promote digestion and to improve circulation.

The main constituent, eucalyptol, is thought to promote digestion. It is known for its subtle bitterness and cooling fragrance.

Gives off a sweet, spicy fragrance. Because it warms the body, it is said to have a beneficial effect on circulation. 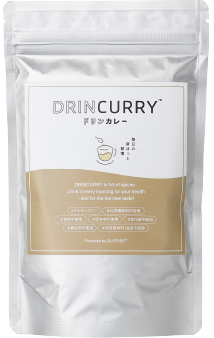 Spice up your daily life

Online shop only available in Japanese for now

For inquiries send an email to: info@drincurry.com